CrossFitting for A Cure: How One Woman Is Turning Fear Into Action in The Fight Against Alzheimer’s 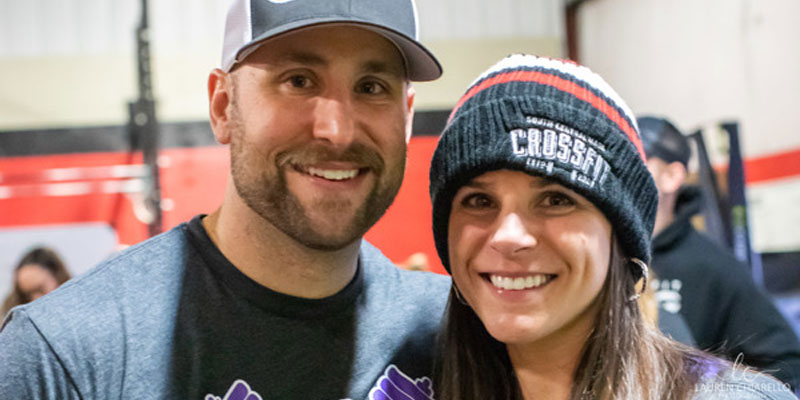 CrossFit is perhaps one of the most popular fitness franchises in the world, with a die-hard, dedicated community of gym-goers. But Tracie Kurczy-Lussier of Auburn, MA isn’t just dedicated to keeping fit through CrossFit – she’s also using it to be a warrior in the fight to end Alzheimer’s. 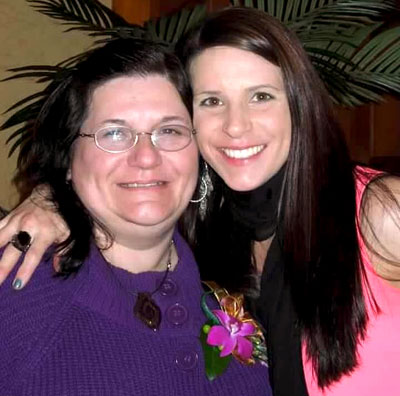 Tracie Kurczy-Lussier and her mother, who was diagnosed with early-onset Alzheimer’s at just 52 years old.

Kurczy-Lussier’s mother was diagnosed with early-onset Alzheimer’s at 52. Her grandmother passed from the disease at 58, and five of her grandmother’s siblings succumbed to it as well. They all suffered from Autosomal Dominant Alzheimer’s Disease (ADAD), a rare, early-onset form of Alzheimer’s caused by a genetic mutation. Descendants of those with ADAD have about a 50 percent chance of also being affected by the disease.

“It’s absolutely a tragedy in our family,” she says. “I’m hopeful there will be a form of treatment available sooner rather than later. Unfortunately that’s not going to help my mom at this point, but it will for future generations. I do not have children but my brother does, so I think about them. And I think about us.”

It’s enough to cause anyone to become filled with sadness and fear. But Kurczy-Lussier isn’t just anyone; she’s choosing instead to turn fear into action and sadness into hope.

She’s been doing that since 2012, when she and her husband Brian organized their first annual CrossFit fundraiser and raised $600 to benefit the Memory and Aging Program (MAP) at Butler Hospital in nearby Rhode Island. Over the years the annual fundraiser has also benefitted the Massachusetts/New Hampshire Chapter of the Alzheimer’s Association.

“There are people who participate that have family members with older onset Alzheimer’s. I think learning the disease can occur much earlier in life is eye opening to them,” she says, “Incorporating fitness into your life is also so important and powerful – it can only help to delay the disease, if you’re unlucky enough to develop it at some point.”

This past November Kurczy-Lussier and her husband hosted their sixth fundraiser, this time working with two area gyms, CrossFit Claddagh in Auburn and CrossFit South Central Mass in Mendon. Together they raised nearly $6,000, and for the third time Kurczy-Lussier directed the donation to support the groundbreaking Alzheimer’s research being done by the Memory and Aging Program.

Participants of the 2018 Crossfit for a Cure fundraiser for Alzheimer’s organized by Tracie Kurczy-Lussier and Brian Lussier.

It’s a cause she knows well because her commitment to ending Alzheimer’s doesn’t stop at the gym doors; she’s also a participant in one of the program’s research studies. The Dominantly Inherited Alzheimer’s Network (DIAN) Study monitors people in families affected by ADAD to better understand this rare form of the disease in order to someday develop treatments for this and other forms of Alzheimer’s and dementia.

“The research I’m involved in at Butler Hospital is so important to and means a lot to me,” Kurczy-Lussier says. “My mom was a participant as well, she is 62 and has been in a nursing home for almost five years now. I do all of this for her, the future of our family and other families that are affected. I’m just trying to do my piece and although it’s difficult, it makes me feel good to be part of the study. I couldn’t do it without my husband, who is a huge support for not only me but the cause as well.“

As a participant in the DIAN study, Kurczy-Lussier could find out whether or not she carries the ADAD genetic mutation as well, but she has decided against it.

“I choose not to know my genetic status. I’m just trying to live my life in a healthy, active way that anyone else would. I guess anything can happen to anyone at any time, so worry is futile. Knowing my future is not right for me, but I still know that developing this disease is a real possibility and it’s scary.”

All the more reason, she says, to participate in research. 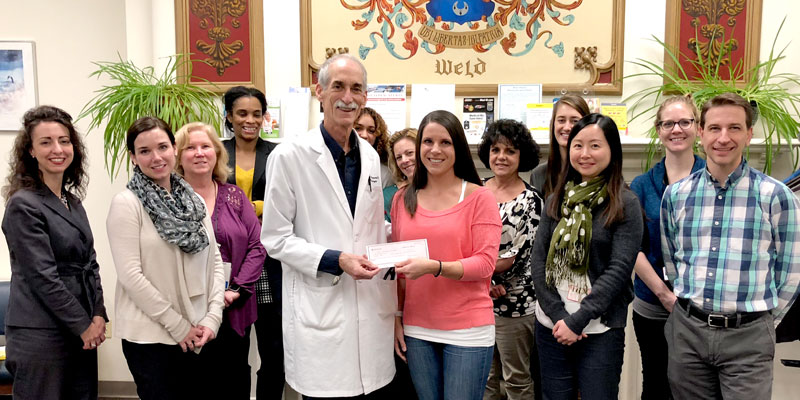 Tracie Kurczy-Lussier presents a check for nearly $6,000 to Dr. Stephen Salloway and staff at the Memory and Aging Program at Butler Hospital in Rhode Island to support groundbreaking Alzheimer’s research being done by the program.

“I’m very thankful to Dr. Salloway [Director of Neurology and the Memory and Aging Program at Butler Hospital, and the Martin M. Zucker Professor of Psychiatry and Human Behavior and Professor of Neurology at the Warren Alpert Medical School of Brown University], as well as the researchers and nurses at the Memory and Aging Program,” Kurczy-Lussier says. “When I go in for my bi-yearly visits, they know me, they know about my family and my history, and they’re all very kind and understanding of my feelings. Its not just about the research, the team is very supportive and caring during an emotional time for participants.”

It is support in all its many forms – from the support of her CrossFit community, to the support she provides and receives at the Memory and Aging Program – that is making the difference for Kurczy-Lussier. It’s also key for everyone else whose lives have been touched by Alzheimer’s, and for the very real possibility of finding an effective treatment for the disease in less than a decade.

In the next 30 years, the number of people with Alzheimer’s disease is expected to triple. Already, 1 in 3 seniors dies with Alzheimer’s or other dementia, and 16.1 million Americans are caring for someone with the disease. But there’s incredible momentum in the race to find better ways to predict who will develop Alzheimer’s, as well as treatments to slow and even prevent the disease. The U.S. has put in place a national goal to do just that by 2025.

The Memory and Aging Program is at the forefront of that effort, conducting more than a dozen groundbreaking research studies and clinical trials that could yield an effective end to Alzheimer’s as we know it by the 2025 deadline.

One trial involving a drug intended to slow the progression of the disease was profiled in TIME Magazine earlier this year. At the start of 2019 the program will add another new study to the mix – one that holds great promise of being able to predict if someone will develop Alzheimer’s years before symptoms develop with the use of a quick, simple and painless retinal scan.

It is support for these studies and trials – through donations and through participation – that, again, will make all the difference, says Dr. Salloway.

“Tracie’s support of our program through her fundraisers and the participation she and her family provide to our studies is an invaluable gift. She is a true hero and a warrior in the war against Alzheimer’s,” Dr. Salloway said.

The metaphor of war is a good way to describe the fight against Alzheimer’s, and it’s one that Dr. Salloway uses as a rallying cry.

“I’ve been working to help bring an end to this disease for 27 years, and being persistent and relentless is really the key in attacking a disease like Alzheimer’s,” Dr. Salloway says. “We’ve made a lot of advances and we’re really on the verge of some incredible breakthroughs, but people have to know what’s going on, and they have to participate. What we need is a citizen army to fight Alzheimer’s, and we’re starting to build one right here in Rhode Island, and that’s so exciting, but we need to grow it even bigger.”

“The only way we’re going to cure Alzheimer’s is by transforming fear into action; action through advocacy and participation, and refusing to accept anything less than a way to prevent and effectively treat this disease,” he said.

The Memory and Aging Program is currently seeking people with normal cognitive function as well as those with mild memory impairment to participate in current and future studies. To learn more about the Memory and Aging program and how you can get involved, visit butler.org/memory.