On A Quest to End to Alzheimer’s: Dr. Stephen Salloway in East Side Living Magazine 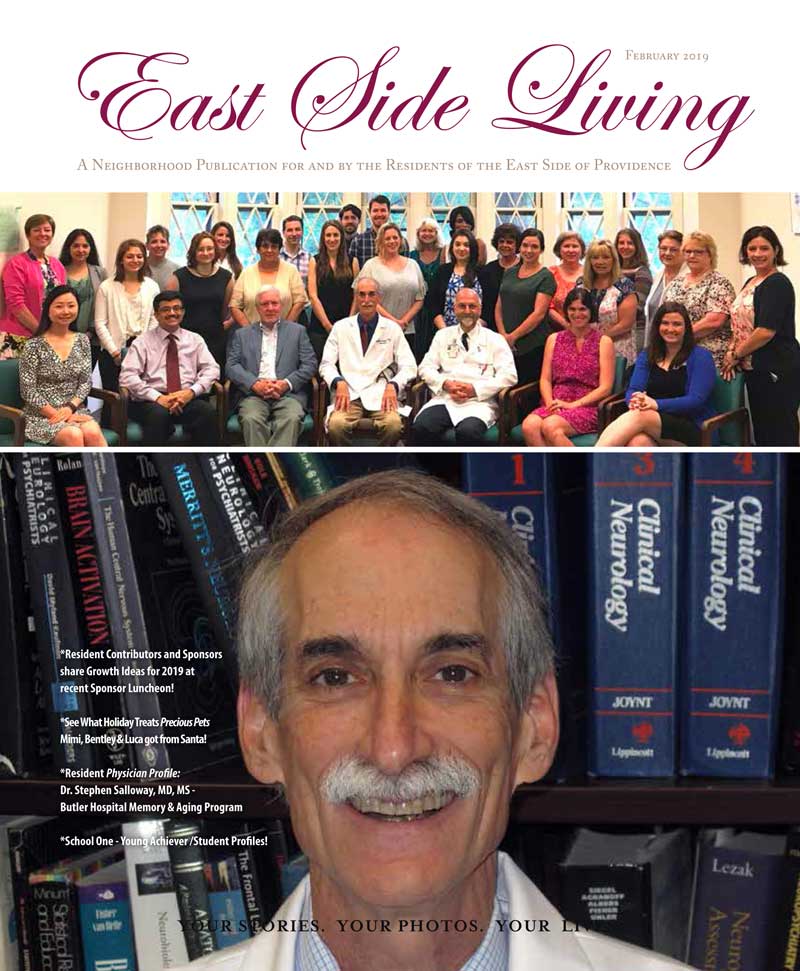 Dr. Stephen Salloway, director of the Memory and Aging Program at Butler Hospital, is featured on the cover and within this month’s issue of East Side Living magazine. In the piece, Dr. Salloway shares what drives his 20+ years of leading groundbreaking research efforts in the quest to find an effective treatment for Alzheimer’s disease. The article is reprinted below, with permission of the publishers of East Side Living. The magazine is published for and distributed to residents of Providence, Rhode Island’s east side.

My wife, Diane, and I have lived on the East Side for 12 years. The East Side is a great place to live – close to work, great restaurants, cultural activities and our synagogue. Together we have five children and two grandchildren, with another grandchild due in May. I received my medical degree from Stanford Medical School and completed residencies in neurology and psychiatry at Yale Medical School. I have been working at Butler and Rhode Island Hospital since 1991, and am a lifelong Patriots and Red Sox fan. I am the Director of Neurology and the Memory and Aging Program at Butler Hospital and the Martin M. Zucker Professor of Psychiatry and Human Behavior and Professor of Neurology at the Alpert Medical School of Brown University.

I have always had an interest in making a big impact against a major brain disease. Like a lot of us, my grandmother, Lena Salloway, had dementia and I saw the impact it had on her life and our family. In 1997 we opened the Butler Hospital Memory and Aging Program to combine the best research with compassionate care for people who may be at risk or already experiencing memory loss.

Over the past 21 years, our program has become a leading force in Rhode Island’s fight against Alzheimer’s disease. Working together with major research centers around the world we have developed new brain scans that can safely see brain changes in Alzheimer’s disease 15-20 years before memory loss and we are developing new treatments that can remove amyloid plaques and lower tau protein in the brain. Early treatment will have the biggest impact and, increasingly, our work is focused on preventing Alzheimer’s disease in people at risk.

We are fortunate to be working with hundreds of amazing and inspiring study volunteers. Most of these people are participating to try and protect their children and grandchildren from having to face the ravages of Alzheimer’s disease. Many people have concerns about participating in research and finding out more about their risk for Alzheimer’s disease. Our staff has created a caring atmosphere that puts people at ease and study volunteers look forward to coming and feel that are really making a difference.

We are proud to be a part of the Alpert Medical School and the Carney Brain Science Institute helping to develop cutting edge research in Alzheimer’s and other brain diseases at Brown. Our work has been covered in Time magazine, Nova, The Providence Journal, leading medical journals and media outlets around the world. Check out our Alzheimer’s Prevention Registry and consider signing up to learn more about available research options. People ages 55-78 may be eligible for a free cheek swab to test for the most common risk gene for Alzheimer’s disease.

Over the past year, our program has conducted 20 swab events throughout Rhode Island at the Providence WaterFire, Brown University’s Class of 1968 50th Reunion, the Alzheimer’s Association Providence Walk, and with Rotary Clubs, lifelong learning groups and senior centers. This spring we will be launching a major study using retinal imaging to see if changes in the eye can predict the changes in the brain that will lead to Alzheimer’s. We are also recruiting for a landmark study to measure early brain changes in people ages 40-64 who are cognitively normal or have mild stages of memory loss or dementia. Our memory clinic provides evaluation and treatment as well as research. There are currently clinical trials enrolling for those who have no cognitive complaints as well as those who have a diagnosis of mild cognitive impairment or early Alzheimer’s disease.

To receive more information or see if you might be eligible to participate in one of Dr. Salloway’s research studies, call 401-455-6402 or join Butler Hospital’s Alzheimer’s Prevention Registry by visiting butler.org/memory. You can also follow the Memory and Aging Program (MAP) on social media to learn more about upcoming swab parties and events: www.facebook.com/groups/MemoryAndAging and www.twitter.com/MemoryAndAging.

UP NEXT | The Great Challenges and Rewards of Caring for Alzheimer's Patients: Nurse Practitioner Brittany Dawson →