Stephen Salloway, MD, a global leader in Alzheimer’s disease research, was inducted into the Rhode Island Heritage Hall of Fame at the organization’s annual induction ceremony on Wednesday, May 8. Dr. Salloway is director of neurology and the Memory and Aging Program at Butler Hospital, and is the Martin M. Zucker Professor of Psychiatry and Human Behavior and professor of neurology at the Warren Alpert Medical School of Brown University.

Dr. Salloway was nominated for induction into the Hall of Fame by long-standing Hall of Fame board member Dr. Roberta Feather, who also serves on the Butler Hospital Foundation Board of Directors. Dr. Feather’s nomination letter paints the picture of a man motivated by equal parts passion and purpose, fueled by both curiosity and compassion – from his experience of sharing a room with his grandmother as a young child while she succumbed to dementia, to his resulting decision to pursue the study of medicine and brain disease, to the illustrious career in medicine, research and teaching that has followed.

UP NEXT | Study: Amyloid Plaques in Brain Linked to Greater Growth of Tau "Tangles," Development of Alzheimer's → 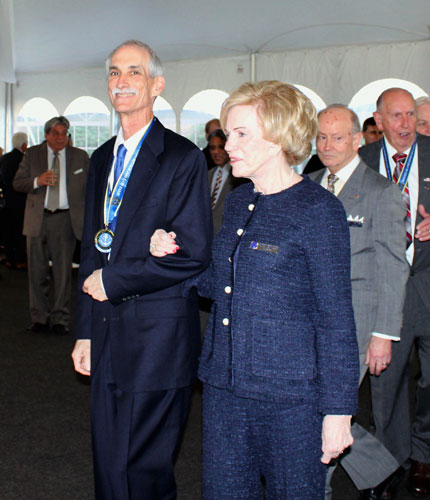 Dr. Stephen Salloway with Dr. Roberta Feather, who nominated him for induction into the RI Heritage Hall of Fame. 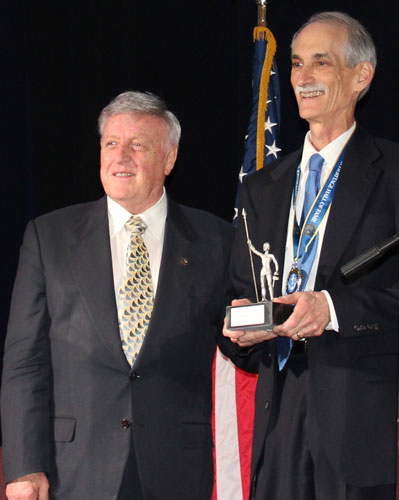 Dr. Stephen Salloway during his induction into the RI Heritage Hall of Fame.

“One of the things that I look for [when I nominate someone] is what they’ve done in a charitable manner,” Dr. Feather said. “I’m not interested in someone who finds a ladder to success but along the way didn’t give back, and I think Dr. Salloway has definitely been very charitable in the efforts that he has made toward prevention of Alzheimer’s. I’ve known him for 10 years, I’ve heard him speak many times and have always admired him. He’s completely dedicated to what he does and at the same time I think he’s also a person who relates to people in a very easy manner. He gives people hope.”

Dr. Salloway’s professional accomplishments and contributions to the field of Alzheimer’s research are staggering and continue to grow.

As the founding director of the Memory and Aging Program at Butler Hospital, for the last 22 years he has, from his offices on the Butler Hospital campus right here in Rhode Island, played a major role in advancing the study and treatment of Alzheimer’s disease and dementia for the entire world.

Under his direction the program has conducted over 100 clinical trials and research studies. Each of them has provided another small step forward in the fight against Alzheimer’s through deeper insights and understanding into how the disease develops, how it can be diagnosed earlier and more accurately, and how it might then be treated more effectively or even prevented altogether.

Today, those many small steps are building to what Dr. Salloway and his team hope will be a giant leap in Alzheimer’s treatment in the next several years.

“Dr. Salloway has played a pivotal role in the worldwide fight against Alzheimer’s disease for more than 20 years, and we are extremely proud that under his guidance Butler’s Memory and Aging Program has continued to produce such important outcomes,” said Mary Marran, president and COO of Butler Hospital. “The work of Dr. Salloway and his team has and will continue to impact countless individuals and families fighting against this terrible disease, and we congratulate him on his induction into the RI Heritage Hall of Fame.”

In the last year alone, the program has embarked on three new landmark studies. The results of another trial for which Dr. Salloway helped to plan the initial protocol and that was conducted in part at the Memory and Aging Program found that amyloid PET scans can significantly improve the accurate diagnosis and subsequent medical management of patients with mild dementia. Another study that Dr. Salloway co-authored found that the brain damage that leads to Alzheimer’s can be detected with a simple blood test up to 16 years before symptoms appear, allowing for earlier intervention and more effective treatment – an advancement that Dr. Salloway calls a “game changer.” And he also co-authored newly released Appropriate Use Criteria to guide healthcare providers in using another simple and safe tool – a spinal tap – to identify individuals at risk for developing Alzheimer’s years before symptoms appear. 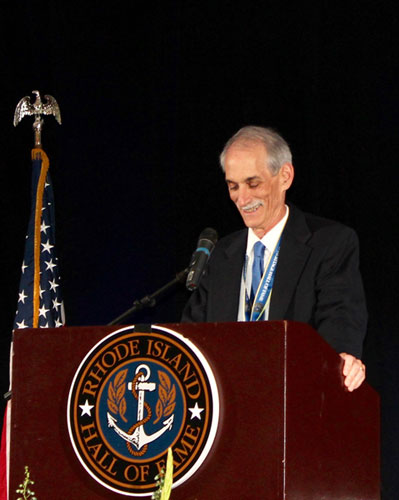 Dr. Stephen Salloway makes his remarks after being inducted into the Rhode Island Heritage Hall of Fame, May 8, 2019.

Those latest accomplishments are just the tip of the iceberg.

Over the course of his nearly 35-year career, Dr. Salloway has published more than 370 scientific articles and abstracts, including lead authorship on pivotal trials in the New England Journal of Medicine, the Lancet, Nature, JAMA Neurology and the Cleveland Clinic Journal of Medicine.

He is also a scientific reviewer for the NIH and for more than 30 journals, universities, and research foundations and has co-authored three books on the topics of neuropsychiatric illness and vascular dementia.

In addition to his published work, Dr. Salloway has presented at Alzheimer’s and dementia conferences, symposiums and task forces around the world, and his work and expert commentary have been covered by national media outlets including TIME, Nova, the New York Times, Newsweek, USA Today, the Associated Press, NBC Nightly News, ABC World News Tonight, Good Morning America, the Wall Street Journal, CBS Healthwatch, Reuters Health, and many others.

Perhaps the only thing that might rival the number and significance of the accomplishments contained in Dr. Salloway’s nearly 100-page curriculum vitae is the less tangible but profoundly meaningful impact he has had on the lives of his patients and their families, as well as his staff and his students.

He’s regarded as an engaged and enthusiastic leader and mentor to his staff and students. 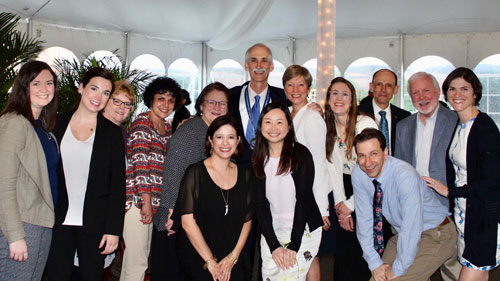 Dr. Stephen Salloway (center) and members of his Memory and Aging Program team at his induction into the RI Heritage Hall of Fame, May 8, 2019.

“Dr. Salloway is a terrific leader. His dedication to the field, his work ethic, and his ability to bring people together help motivate our staff every day. He is an inspirational spirit who can light up a room by finding the right combination of words to fire people up about the fight against Alzheimer’s,” said Memory and Aging Program Research and Operations Manager William Menard.

“When you hear him speak it compels you to want to do more. Working with him doesn’t feel like a job; it’s more like being part of a team on a mission where the end goal is a cure for an awful disease and he’s right there with you on that journey.”

Dr. Karen Bell, a retired physician and national health policy expert who volunteers with the Memory and Aging Program echoes those sentiments, saying that Dr. Salloway possesses “a special combination of brilliance, practicality and empathy.”

It’s an observation heard frequently from his patients and study participants as well. Paul Coté, a well-known Rhode Island artist who has lost four aunts and his father to the disease, describes Dr. Salloway as simply, “Amazing.”

“Dr. Salloway has helped not only my family but thousands of other people,” Coté says. “He’s at the cutting-edge of research with the studies he’s doing at Butler…and he’s making a difference.”

About the Rhode Island Heritage Hall of Fame

The Rhode Island Heritage Hall of Fame honors people who were born in, lived in, or worked in Rhode Island whose work or talents have brought the state into prominence, or who have contributed to the history and heritage of the state. Inductees are chosen by the Hall of Fame’s twenty-five member board of community leaders. The other 2019 inductees include Judge Frank Caprio, Lester W. Cory, Richard I. Grouse, Dr. John B. Hattendof, Sister Mary Reilly, Charles M. Royce, Neil D. Steinberg and Dr. Rose E. Weaver.

The Memory and Aging Program (MAP) at Butler Hospital is a worldwide leader in Alzheimer’s disease research and a local Rhode Island partner in the fight against Alzheimer’s disease and other dementias. We are working hand in hand with community groups, health care providers, research organizations, and people like you to find preventative and breakthrough treatments for Alzheimer’s disease. To learn more and to get involved, visit butler.org/memory.

READ NEWS COVERAGE OF THIS STORY: